This bacon hash skillet with runny eggs and harissa will definitely be the highlight of my Christmas brunch this year.  As a bonus, you can make them in advance! That way, all you have to do is pop on the coffee before everyone arrives.

I relate to the average grandpa in the following three ways: 1. I always have heartburn. 2. Loafers are my footwear of choice. And 3. I feel an undying desire to keep traditions alive. It’s why I indulge my great uncle every Christmas when he insists on making the “family eggnog”, which I swear, is made out of gasoline and would actually give me alcohol poisoning if I drank more than two glasses.

But, I have noticed that traditions tend to fade away with age. I don’t think it’s meant to happen, it just does. We did the same exact thing for Christmas Eve for the first twenty years of my life. Every year, we made soup (potato for some, and oyster for those who were brave enough to eat it), lefse, and pie. We exchanged gifts between my mom’s side of the family.  After, we would pile in the car and see the neighborhood Christmas lights. Christmas Eve remained the same, even after I moved away for college. But once my parents sold my childhood home and moved back to Reno, it was sort of the end of Christmas Eves. The ones that actually made it feel like Christmas. And it was weird for all of us.

Christmas Eves since have still been super fun, of course, but it has never felt quite the same. I’m sure it takes time, but we have yet to find a good Christmas-y tradition to re-establish. So this year, I decided to make one. No, it’s not as good of a story as a tradition that happens humorously and serendipitously. But, that doesn’t mean it can’t be totally amazing.

Since my mom does Christmas every year, I have decided to take on Christmas Eve breakfast.  If you haven’t noticed, Christmas festivities last for like, a week in my family. Anyone who wants to come is invited.  We will all stand in the kitchen or sit in the living room since, you know, I barely have a dining table. Christmas Eve brunch will be casual, delicious, and stress-free.  (If there is such a thing during the holidays).

These little bacon hash skillets with runny eggs and harissa are the main event this year. I can’t decide if breakfast will be the same each year. But, at least for now, I am taking advantage of the mini skillets I bought myself for Christmas.  When I was testing this bacon hash skillet (my new rapper name, fyi), it was honestly so good that I kept sneaking little bites during the shoot.  I can’t even tell you how amazing potatoes taste with smoked paprika and harissa.  Omggggg.  I did my final testing for these right before I had to be somewhere, so Marc and I had them for dinner that night.  We’ve been talking about them for dayyyyz, they’re so damn good.

I think harissa is what really pulled this bacon hash skillet together; I would 10/10 recommend investing in some if you can.  However, you can also replace it with any chili-based hot sauce and a couple of pinches of caraway and cumin.  I cut up everything the night before, and then in the morning threw it all together.  SO EASY!!  Oh, and another side note: You can make this bacon hash skillet in a large cast iron or ramekins!  You know, if you don’t have tons of mini cast irons sitting around… 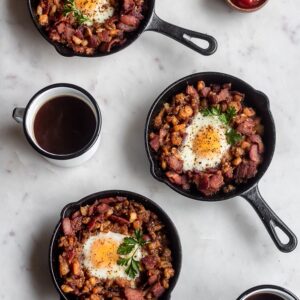 Yield: 6
Prep Time: 5 mins
Cook Time: 25 mins
Total Time: 30 mins
This recipe will make either four big servings, or six small servings (if you are making other breakfast items). If you don’t have a bunch of mini skillets, just use one big skillet or mini ramekins. You can also make this Bacon Hash Skillet in advance, so all you have to do is pop on the coffee before brunch!
Print Recipe Pin Recipe Leave a Review

*Song of the day: I’ll Be Home for Christmas by Sufjan Stevens