Chocolate peanut butter lava cakes baked in mini cast iron skillets and served with peanut butter cup ice cream. Perfect for sharing with friendies, this is the fourth recipe of my Valentine’s series!

As much as I don’t want to admit how many hours I have spent lounging in a BJ’s, it is the site of so many amazing memories with my friends. I don’t even know how it became our tradition but it stuck. Also, for some reason, I have become known for my chocolate chip cookie recipe. Which honestly, is just an elevated version of the Nestle Tollhouse 🤷. But, I decided if I’m going to be “cookie lady”, I would wholeheartedly embrace it. So, I knew I had to do some kind of “pazooki” for my friend’s Valentine’s series post!!

Usually I have some kind of Galentine’s gathering for me and my girlfriends. This year’s will honestly probably not happen until March, because adult life is busy. But, I know that I 10/10 want to make these chocolate peanut butter lava cake skillets. Most lava cake recipes are kind of annoying, because you have to butter a million ramekins and crack a thousand eggs. So I simplified this one, cutting out some eggs and baking the cakes in these cute skillets that are perfect for sharing! Each skillet could easily feed two hungry people or four people who just want a small dessert.

Also, because I consider us all friends, I’m not going to lie to you. I cried while taking these photos. Over the ice cream. Cause it melts. And it melted all over these lava cakes making for some very messy-in-a-bad-way photos. Maybe it’s because my first ice cream shoot went so well, but this one was a disaster. Poor Marc did his best to help, but I couldn’t even be helped at that point. So he awkwardly stared at his phone and offered a comforting antidote every once in a while. Anyways, the photos didn’t even come out that bad. And, I learned a lesson! When serving these chocolate peanut butter lava cake skillets, be sure to put the ice cream on at the very last second. 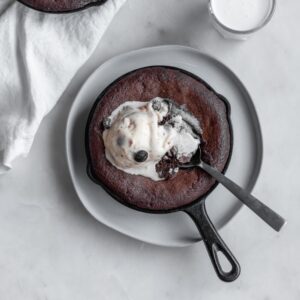 Song of the day: Green Aisles by Real Estate