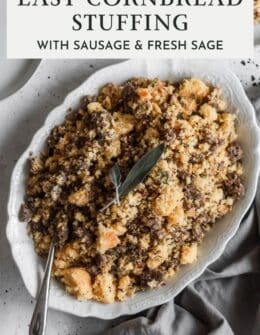 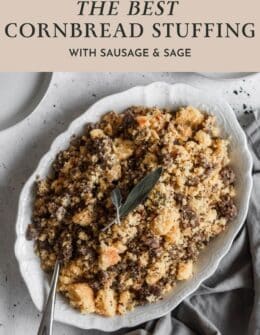 This homemade cornbread stuffing with sausage and sage is the Thanksgiving dish I dream about all year long. With shallots and lots of fresh herbs, it’s flavorful, super easy to throw together, and reheats like a dream!

It’s the most wonderful time of the year a.k.a. Thanksgiving a.k.a. my favorite holiday ever! I don’t think there’s anything better than listening to music and cooking all day and eating and drinking for hours and hours and hours. And now that Marc and I are celebrating our first holiday in our new home, we’re really going all-out in terms of food. The holidays are going to be a little different this year, but I’m going to cook a million things regardless and live off of leftovers until I start baking Christmas cookies.

Every year, the dish that I get most excited for is stuffing. I know that stuffing is divisive and if you’re a stuffing-hater, I really do get where you’re coming from. Stuffing can be mushy and bland and weird and not at all what you want to be filling your plate with when there are a million other good options.

But, this stuffing is different, and I know you’re rolling your eyes now like, “yeah yeah I’ve heard that before” but I wouldn’t lie to you. This stuffing is courtesy of my mom, and she’s been making it since before I was even a thought bubble in her mind. It’s filled with homemade cornbread, sausage, and all the fresh herbs, and we have to double (sometimes triple) it every year so that we can all enjoy leftovers on our turkey sandwich the next day.

This cornbread stuffing is also like, the easiest recipe ever and reheats beautifully if you want to make it in advance. Maybe I’m overselling it at this point, but truly, it’s the best stuffing ever.

The ingredient list here is pretty basic, but just a quick head’s up that you’re going to need to make some cornbread! Truth be told, I use the recipe on the back of the Alber’s box, but any cornbread will do. If you really want, you could even go store-bought, and I wouldn’t even judge you for it.

A make ahead option

If you want to save precious time on Thanksgiving Day, no worries at all! Cornbread stuffing is beyond easy to make ahead, and reheating it is a breeze. Just make the stuffing up until the point where you stir the cornbread, sausage, and herbs together. Don’t add the chicken broth!

Let the stuffing chill in an airtight container in the fridge overnight. When you’re ready to warm it up, just add a little chicken broth and bake for 30 or so minutes at 350°F until warm. Then, right before serving, stir in the parsley and red pepper flakes. Easy peasy!

For my vegetarian friends

Don’t worry, I got you! I know that I have vegetarian friends here, and some people just aren’t into sausage. If you want to make this dish veg friendly, simply leave out the sausage. It’ll still taste just as delicious! However, if you want to add a little bulk to make up for the meat, you can always add some chopped mushrooms, sautéed apples, Brussels sprouts, or any other vegetable you enjoy.

Personally, I just serve cornbread stuffing as a stand-alone side dish, but you have options here! One recipe will yield enough stuffing to fill an 8 pound turkey. If you have anything over 12 pounds, I would probably recommend doubling the recipe.

In terms of leftovers, my favorite is the classic post-Thanksgiving turkey sandwich with cranberry sauce, mayo, and provolone on toasted sourdough! I’ve also eaten leftover stuffing for breakfast the next day topped with runny eggs. Of course, there are a million ways the internet has come up with to eat leftover stuffing, but my favorite idea in particular might just be the Thanksgiving poutine, because wowowow that sounds insane!

Oh look, I planned out the rest of your Thanksgiving side dishes too! 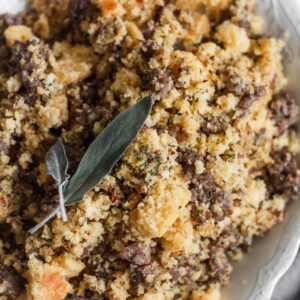 Yield: 8
Prep Time: 10 mins
Cook Time: 15 mins
Total Time: 25 mins
Cornbread stuffing with sausage & sage is the side dish I look forward to most every Thanksgiving! Delicious, quick to throw together, and it's a breeze to make ahead and reheat.
Print Recipe Pin Recipe Leave a Review

Crumble the cornbread in larger chunks so that when you fold it in with the rest of the ingredients, it does not get too mushy. Add chicken broth slowly to ensure the stuffing doesn’t get soggy. If you’re vegetarian, or not a fan of sausage, just leave it out or add mushrooms, Brussels sprouts, etc.!
Cuisine: American
Course: Side Dish
Serving: 1scoop, Calories: 426kcal, Carbohydrates: 46.9g, Protein: 12.6g, Fat: 20.1g, Saturated Fat: 4.5g, Cholesterol: 47mg, Sodium: 528mg, Potassium: 306mg, Fiber: 1.5g, Sugar: 5.3g, Calcium: 97mg, Iron: 2mg
Did you make this recipe?Tag @sundaytable.co on Instagram!

*Song of the day: Motion Sickness by Phoebe Bridgers