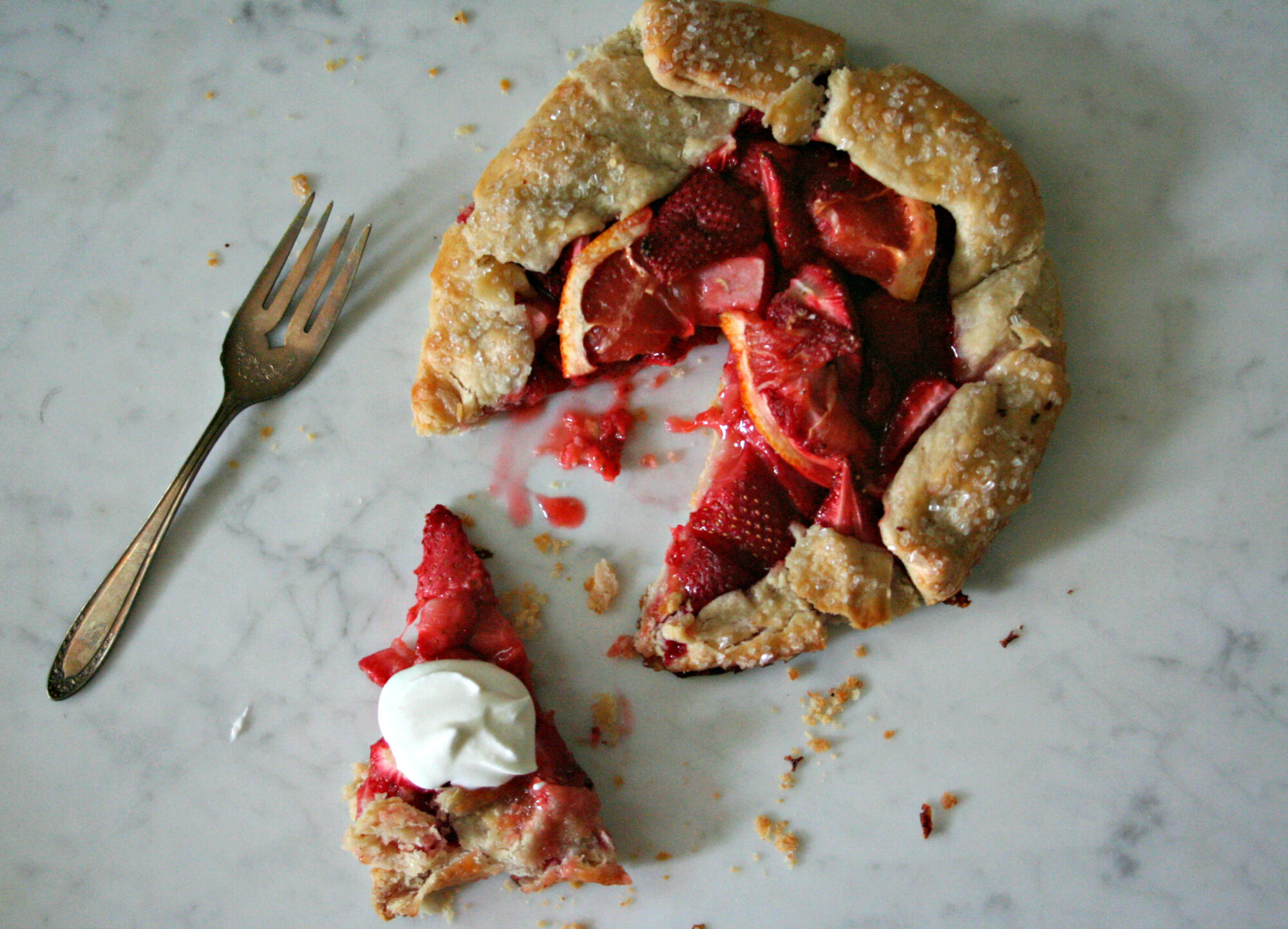 First, let me start off by apologizing for the sheer amount of photos in this post alone.  It’s borderline absurd, but damn, for a dessert whose dough is made with a whole box of butter, that is one sexy little number.  I wish I had an excuse, but this galette is so pretty, and I just. couldn’t. stop.  It’s not every day that you make something with pie dough and think it’s sexy.  But that’s just how my brain functions, because I don’t care what people say, food is hot (literally and figuratively).

Moving on from my weird attraction to pie, which is actually a galette, which leads me to WHERE HAVE GALETTES BEEN ALL MY LIFE?  Seriously, I’ve been making pie when there were galettes in the world?  What is this?  I’ve been rolling and draping and pushing extra dough into little rips and pretending that I’m good at making pie when all I had to do the whole time was roll out a single piece of dough and fold?  Also, why did I never listen to my baking instructor and use egg wash until now?  I always thought it was an unnecessary extra step, but look at that crust.  Guys, I just can’t deal with it. 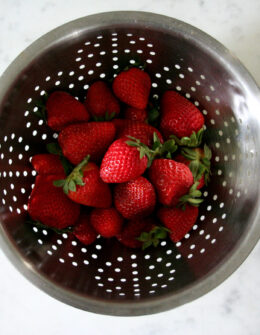 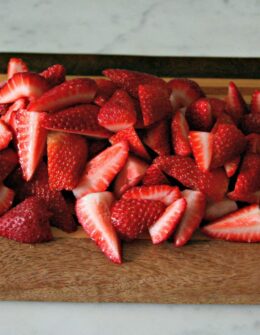 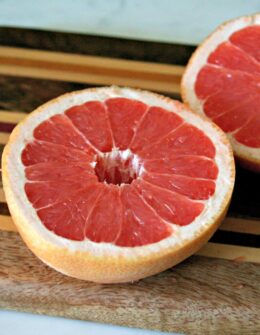 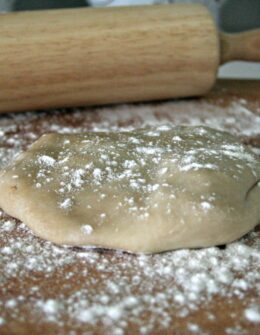 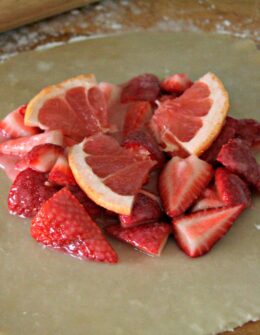 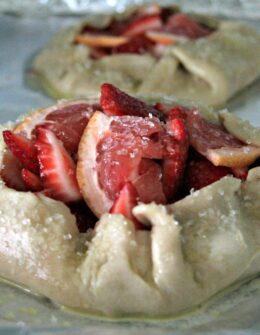 Furthermore, I know that it is rhubarb season, I promise nobody will let me forget that, but I just am not as excited about rhubarb as everyone else is.  It’s not that I don’t like rhubarb, it’s just that I’m destined to eat it at least four times in the weeklong that it’s in season, so I just don’t see a need to cook with it myself.  Also, I’m not going to lie, I just don’t find it as amazing as everyone else does.  I’m sorry, it’s nothing personal, I swear.  I just don’t look forward to it quite as much as the rest of the food-blogging world.  But I digress.  Long story short, this probably should have been a strawberry and rhubarb galette, but it was not, because I’m more of a citrus lady.  Namely, citrus that does not get quite enough credit.  A.K.A. grapefruit.  Now, I know that lemons are so versatile, and limes are just sooo good, but grapefruit does not get the recognition that it deserves.  And have you had it with strawberries?  I’m sorry, but it just needed to happen eventually, and I took the plunge.  You won’t regret it my friends, the two are destined to be together. 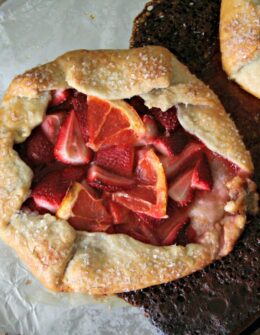 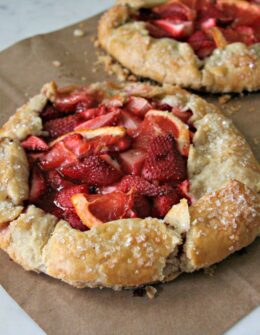 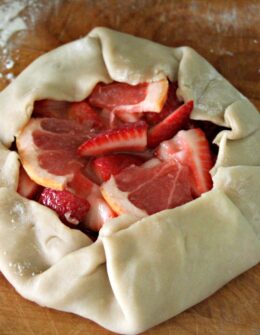 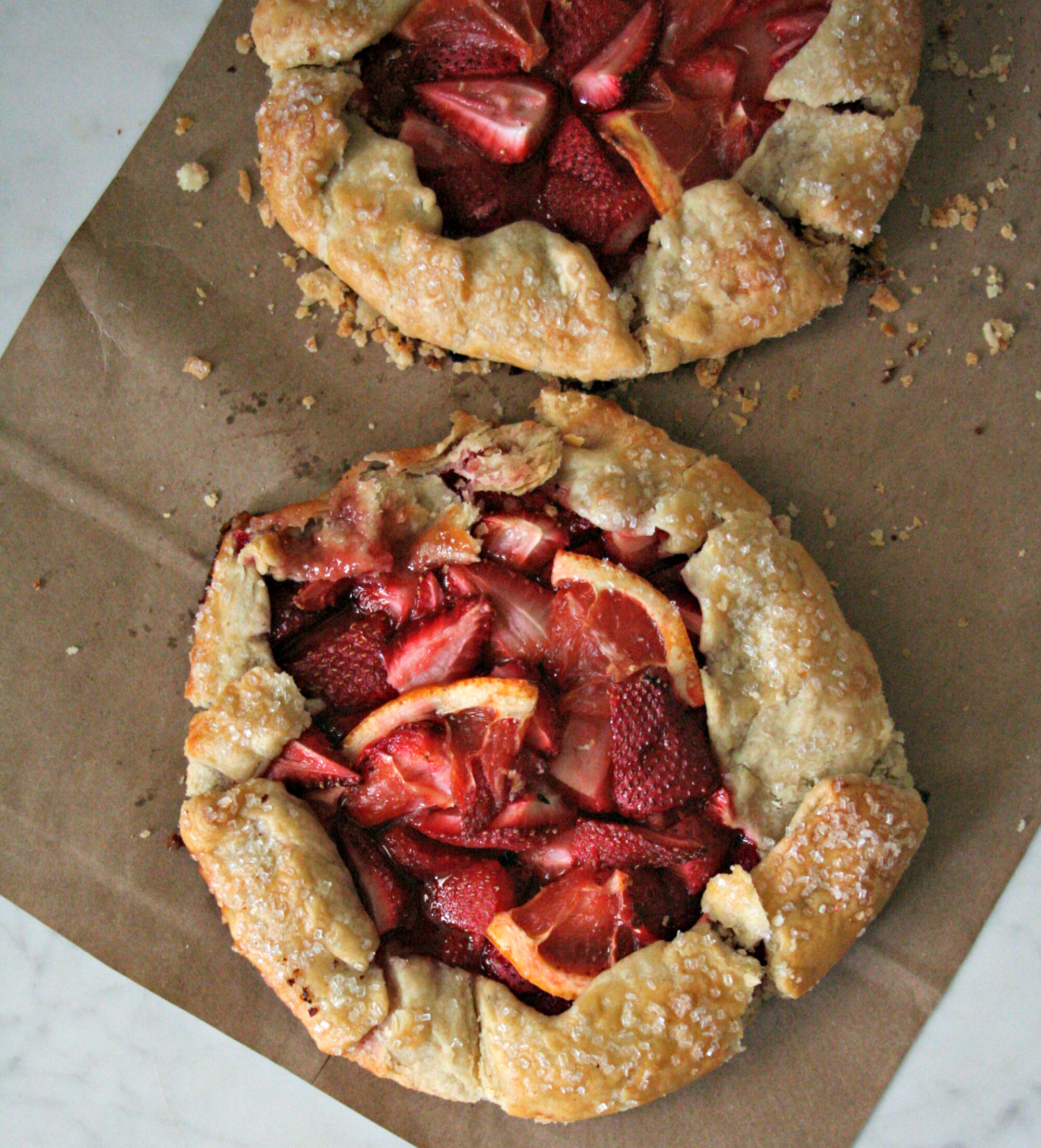 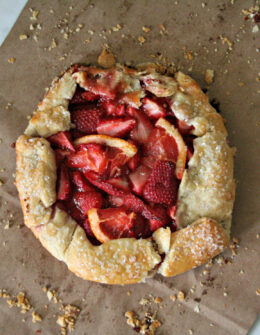 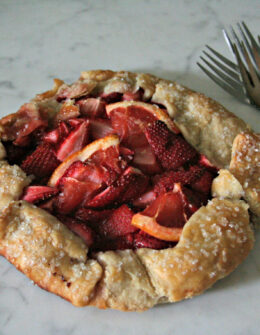 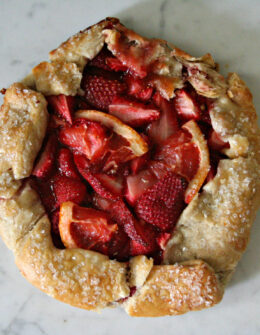 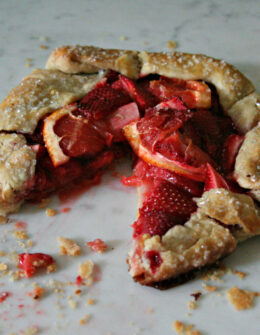 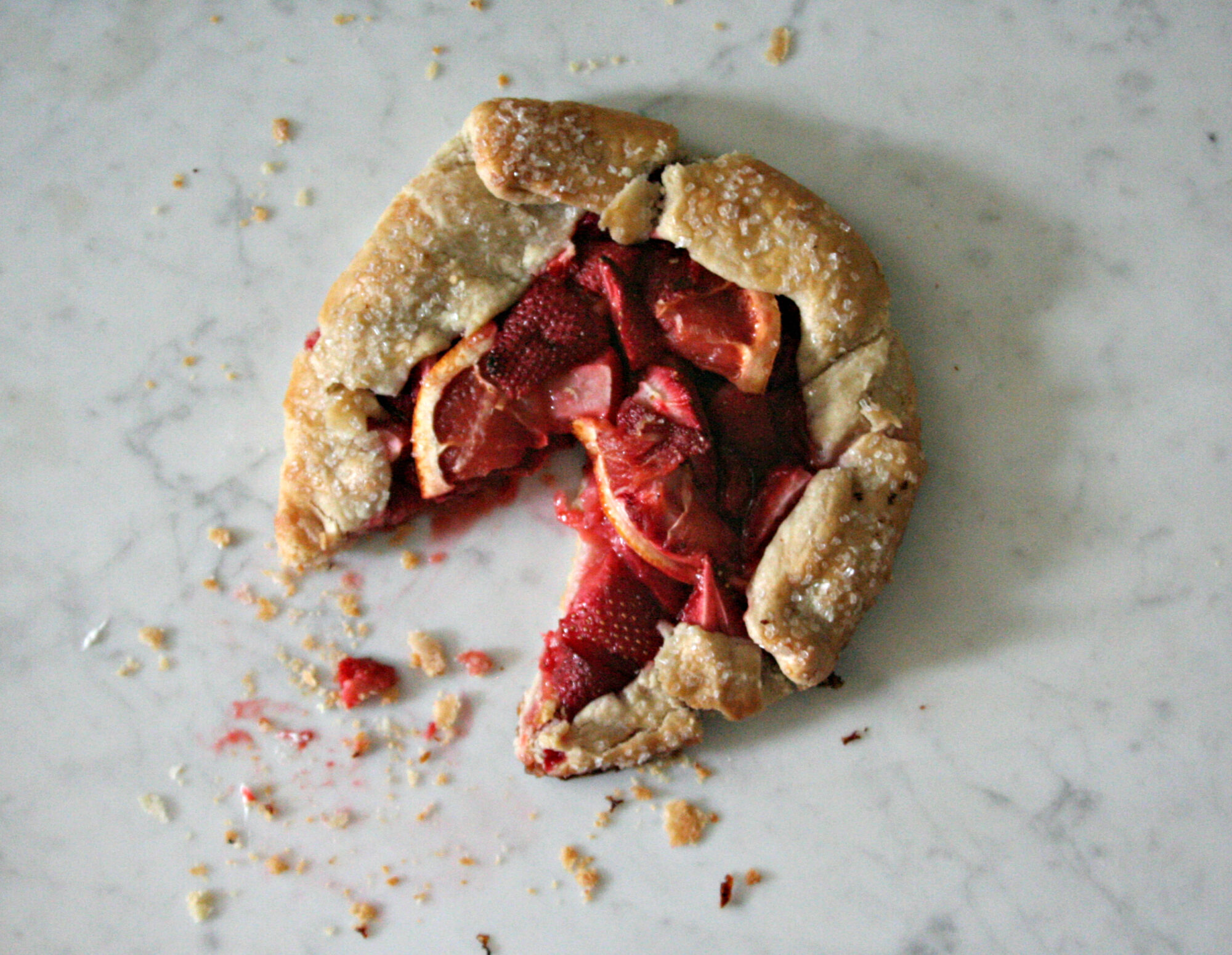 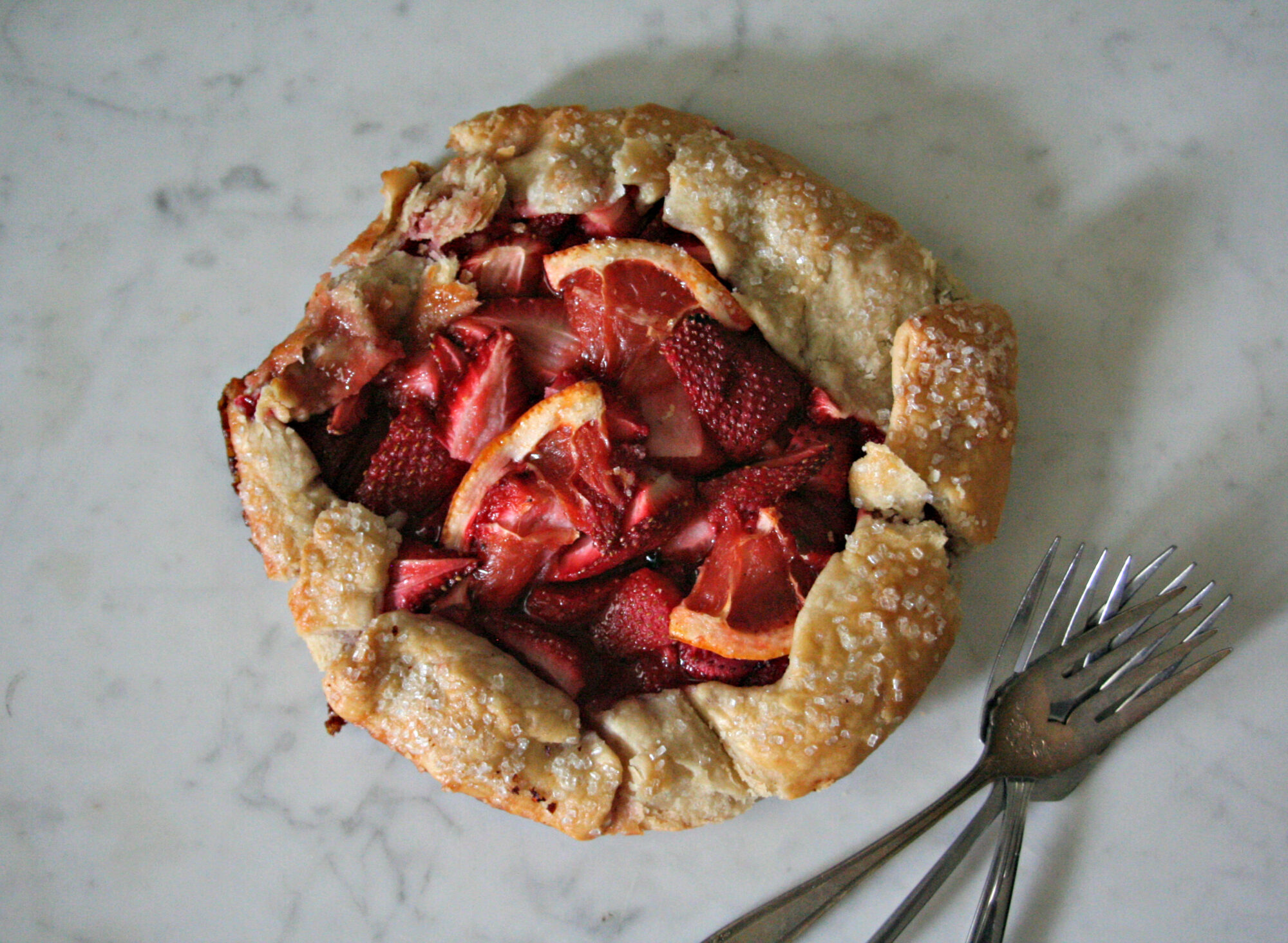 Look at the beautiful reds and pinks and oranges and THE CRUMBLY CRUST.  Ughhhh ♥

A few notes about this recipe.  First off, I love using homemade pie crust.  Someday, I swear, I will give you a step-by-step tutorial for how to make it, because it’s so freakin’ easy.  I would have done it this time, but this pie dough was literally gifted to me, because that’s the kind of thing that happens in the food world.  That being said, I understand if it’s too much and you want to make it with pie dough from the freezer aisle.  In this case, please use the Pillsbury and the rolled kind, not the stuff already in the disposable tins.

Secondly, I chose to make 2 smaller galettes, but you can make one large one.  You would just use a larger dough diameter and reduce the amount of filling you make.

Thirdly, I recommend assembling the galette on the sheet pan you will bake it on.  Assembling it on the counter and trying to move it to the sheet pan is dirty work, and I would know, because I didn’t learn from my mistakes the first time and had to do it twice.

Fourthly, BAKE IT ON TINFOIL OR PARCHMENT PAPER I SWEAR THIS IS SO IMPORTANT.  These little suckers will leak juices like you wouldn’t believe (see pic above) and caramelized fruit juices will not release from a sheet pan, I’m telling you so.  On that note, you can also increase the cornstarch if you want more of a stable galette, but I like mine on the juicy side.

Lastly, serve this with whipped cream or vanilla ice cream.  My favorite is Talenti vanilla bean. 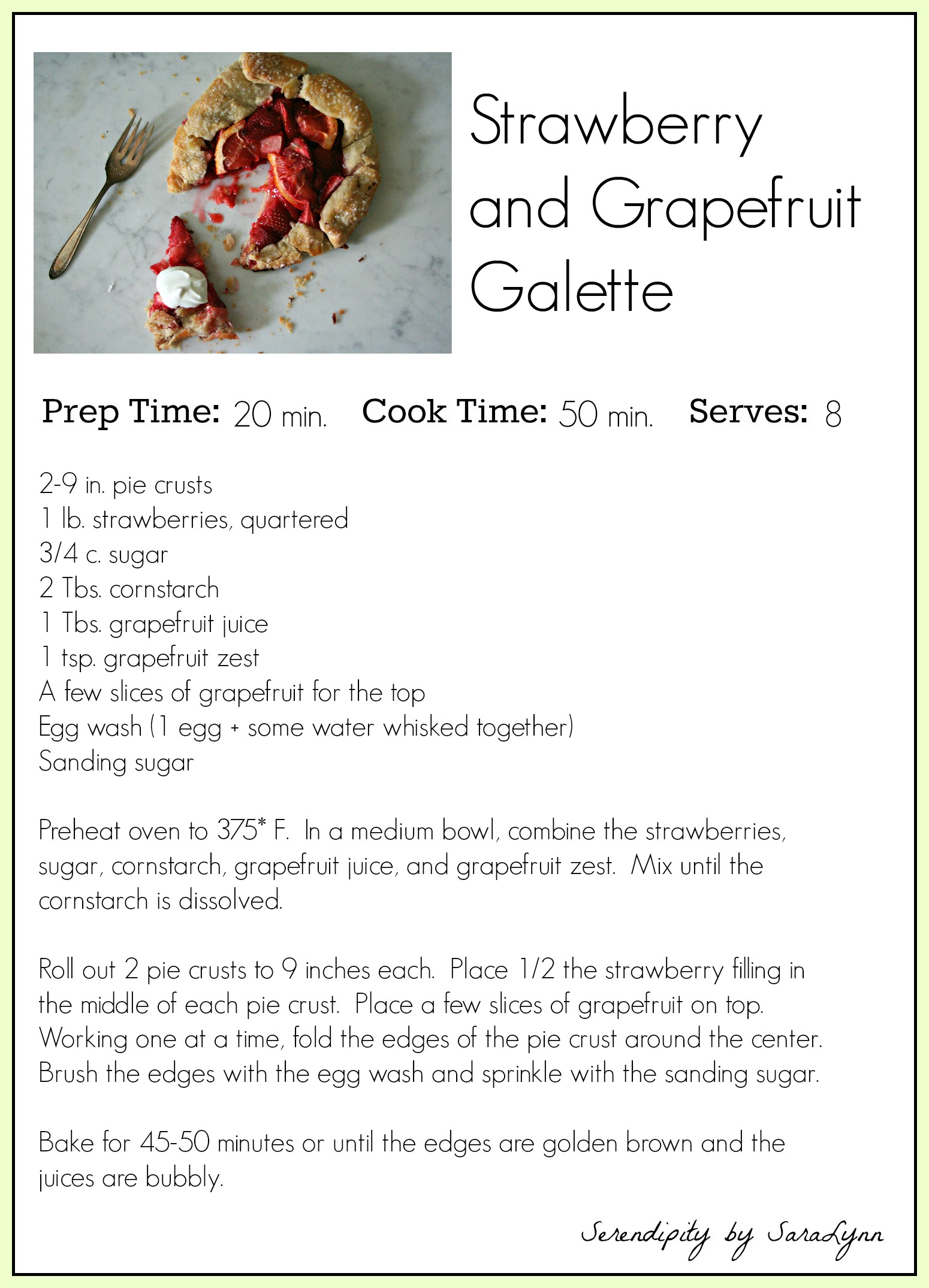 By the way, if you read my Instagram , you saw that I posted about my VERY EXCITING RECIPE COMING SOON.  This is it.  I hope it was everything you wished it would be.  It definitely was for me.

*Song of the Day: Away Frm U by Oberhofer

2 comments on “Strawberry and Grapefruit Galette”