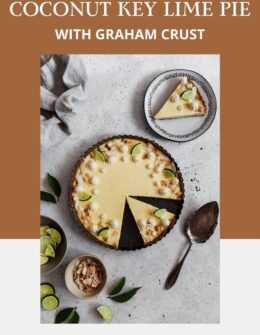 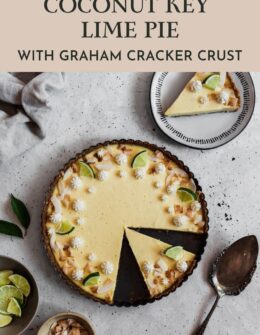 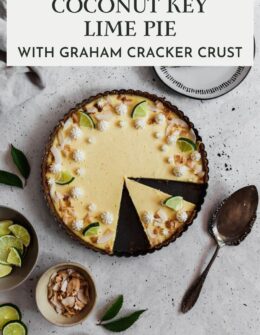 I’m officially deeming this summer “coconut key lime tart” summer because I’ve barely worked out since our wedding and to be honest, I’d rather eat pie anyways. Although a new gym did just open only five minutes from our house, so I’m thinking I’ll get back into it, but first thing’s first. We need to discuss this tart. I have priorities!

Key lime pie always makes me think of my Gram because it was her favorite dessert. Probably because she grew up in the Florida Keys where this recipe was created. And, I guess I take after her judging by the absurd amounts of key lime pie flavored yogurt I consumed in my teen years. Anyways, this year, I decided it was finally time to make something based entirely on my cravings, because…self-care? So I added a bunch of coconut and a heavy dose of whipped cream and a dash of cinnamon because honestly, I tried cardamom and it just didn’t shine through. It was the first time cardamom has semi-failed me, but not really, cause it was still good, just not as delicious as the cinnamon addition.

I fully believe that summer recipes should be easy, so we’re keeping things pretty basic this time around! For this recipe, make sure to grab:

We’re going to make the coconut key lime tart in three separate parts. But don’t worry! All of the steps are super easy and don’t take long.

Mix up the filling

For this to be a true key lime pie, we’re going to use key lime juice and zest! Yes, it’s a little extra work to juice and zest a bunch of key limes but I promise it’s worth it. They have a slight bitterness to them which gives key lime pie its signature, tropical taste. Regular limes are a bit more floral and tart.

To keep this coconut key lime tart fresh, just press a piece of plastic wrap to the top to keep it from forming a skin. This tart is best fresh, but it will last in the fridge for about three or four days. Perfect for a make-ahead dessert option. The graham crust will get a little soft over time but it’ll still taste great! 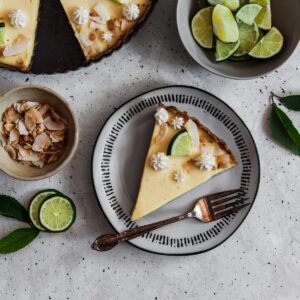 ** 8/12/21 Update: An earlier version of this recipe specified using coconut cream instead of coconut milk. I actually tested this recipe later with coconut milk and I didn’t notice a texture difference. To use milk instead of cream, just refrigerate a can of coconut milk for about 2-3 hours, and scoop out the thick cream that forms on the top. Avoid the liquid at the bottom of the can, or it could affect the texture. Make sure you’re using coconut cream, not cream of coconut used for cocktails. You can find coconut cream in the Thai/Asian aisle of the grocery store. Use fresh (not bottled) lime juice. If you can’t find key limes, use regular limes. Occasionally, key limes are also called Mexican limes. If you don’t have a food processor to make graham cracker crumbs, simply place the graham crackers in a zipper bag, and use a rolling pin to crush the crackers until fine. Then, mix the crust ingredients by hand.
Cuisine: American
Course: Dessert
Serving: 1slice, Calories: 562kcal, Carbohydrates: 56.6g, Protein: 8.3g, Fat: 36.2g, Saturated Fat: 24.9g, Cholesterol: 165mg, Sodium: 260mg, Potassium: 284mg, Fiber: 4.1g, Sugar: 43.5g, Calcium: 176mg, Iron: 2mg
Did you make this recipe?Tag @sundaytable.co on Instagram!

*Song of the day: Just Like Heaven by The Cure