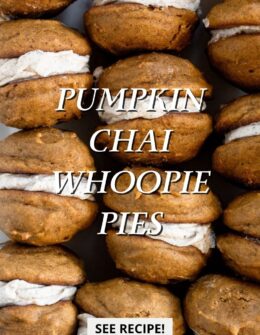 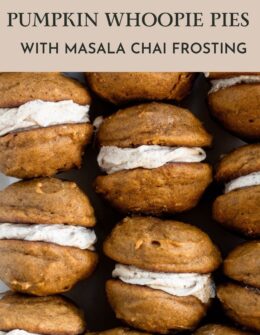 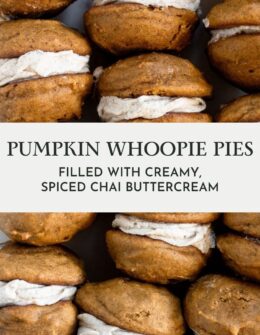 Perfect for holiday parties and potlucks, these pumpkin whoopie pies are made with pillowy pumpkin cookies and a spicy Masala chai buttercream. Oh, and they take less than an hour to make!

Up until a few days ago, I had never had a whoopie pie and honestly, I had little desire.  As cute as they were, inside-out cupcakes were just not at the top of my “to-make” list.  But, one day whilst scrolling through Twitter, a little voice spoke to me.  Almost like a prophecy, it said, “Thou shall create an immaculate autumnal delicacy: an earthy buttercream made with the finest Assam tea, sandwiched between two pillow-y, spiced pumpkin cookies.  They shall be known henceforth, as pumpkin whoopie pies”.

And I was like, “oh hell yeah, those sound delicious”.  Also, the metaphysical spirit had Morgan Freeman’s voice, and it was awesome.

Ok, if you haven’t kept scrolling past my nonsense, obviously none of this actually happened.  As much as I would love for Morgan Freeman to speak to me telepathically, all of my ideas are my own.  Unless you want to refer to my ideas as prophecies, in which case, I guess I could make that work.  The reality though is that I was seeing an ass-ton of whoopie pies all over Insta and figured there had to be something special about them.  And guys, there iiiiis.

While I stand by my comment that whoopie pies are just inside out cupcakes, they’re also probably better than cupcakes.  The cookies are spongy and delicate, there is a perfect amount of buttercream, and they’re just lightly sweet.  Ughhhh.  These were made for people who like frosting-less cake a.k.a. me.

Since it’s spooky season, I obviously wanted to make these pumpkin whoopie pies.  But, I also wanted them to be in the spirit of Thanksgiving.  Plus, my boyfriend has been talking about pumpkin rolls a lot lately, so I had to throw the guy a bone.  I decided on Masala chai buttercream, because it’s delicious, and I have a slight aversion to cream cheese frosting nowadays.  (Mostly because it’s 75% of frosting I made in culinary school, a.k.a. back when cupcake shops were trendy and people were acting like cream cheese frosting was a new invention).  Also, unlike other recipes on the internet, my Masala chai buttercream actually has tea in it.  I don’t think people know that “chai” literally translates to “tea”, and it gets me *flustered*.  But it’s in there, and it totally matters.

I think the absolute best part of these pumpkin whoopie pies is that they honestly took me less than an hour to make.  And everyone devoured the cookies in minutes.  With the holidays coming up, I am always looking for easy and crowd-pleasing desserts that do not require a lot of fuss.  I can assure you, this is one of them.  There is no cake to cut, no pie to slice, no need to remember plates and dessert forks.  You just stack the pumpkin whoopie pies on a plate and let the people do their work.  Easiest potluck contribution everrrrr. 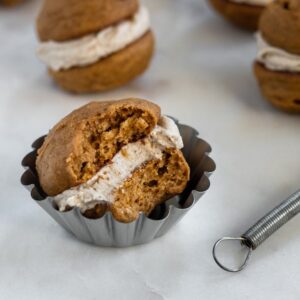 For the buttercream, you will want to use a fresh black tea to make sure the tea flavor comes through. I like to use Assam, but any strong black tea will do. The pumpkin cookies themselves are not super sweet to make up for the sweetness of the buttercream. If you like your desserts a little sweeter, add up to 1/4 cup of more sugar to the recipe.
Cuisine: American
Course: Cookies
Serving: 1cookie, Sodium: 186mg, Calcium: 35mg, Sugar: 21.7g, Fiber: 1g, Potassium: 102mg, Cholesterol: 32mg, Calories: 248kcal, Saturated Fat: 4.7g, Fat: 11.9g, Protein: 2.4g, Carbohydrates: 33.8g, Iron: 1mg
Did you make this recipe?Tag @serendipitybysaralynn on Instagram!

*Song of the day: Turn Your Love by Half Moon Run

One comment on “Pumpkin Whoopie Pies with Masala Chai Buttercream”