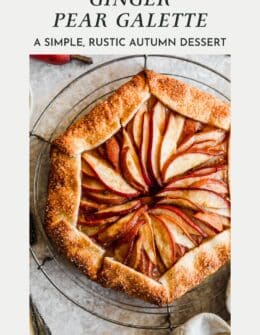 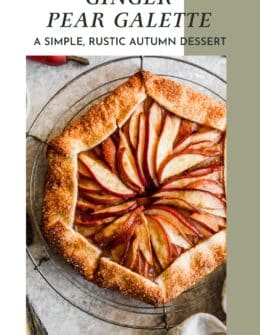 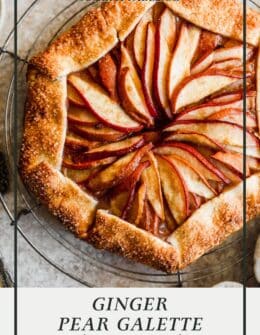 This ginger pear galette is one of my favorite desserts for autumn! It’s much simpler than traditional pie and takes just an hour to make. This rustic galette has buttery homemade pie dough, juicy pear filling, and a nice spice from fresh ginger. Serve with whipped cream or ice cream for a quick, delicious, and easy holiday dessert! (Originally posted on October 13, 2016).

Sometimes I yearn for the kind of life that involves an airy, brightly-lit house on a large, green property surrounded by a variety of fruit bushes, trees, roots, and stalks.  In my little dream, I don’t necessarily have a job per se, unless by “job” we’re talking something along the lines of “fruit-picker who makes artisan pies and breads and fresh salads while experimenting with ingredients all day”.  Then yeah, that’s my job.  Also, I wear a lot of sun dresses and big floppy hats.

Oh! Lastly, and I don’t want to ask for too much here, but since this is a dream after all, my life would include a flannel-beard partner who plays guitar and makes me pour-overs and we have at least 2 dogs.

I realize this dream is not very realistic, mostly because 1. nice flannel-beards who play guitar and make pour-overs are hard to come by these days and 2. I really like my big-city-luxuries if we’re being totally honest. However, a dream is a dream, and this particular dream inspired this ginger pear galette, a.k.a. maybe my new favorite autumn dessert.

Here’s why you need to make this ginger pear galette

This galette was thought-up the other day while I was walking my parents’ property, picking fresh apples and pears from their newly acquired fruit trees (from their newly acquired house, go figures). Stumped over what to do with a million red pears, I decided to follow my go-to philosophy surrounding fruit and all foods in general: turn it into a pie!

And like, ok, galettes aren’t pie but they kind of are. They’re just a much easier pie and you don’t have to wait hours to slice into it which is a bonus. This pear galette is jammy, has a nice spice thanks to fresh ginger and cinnamon, and it has a crisp, buttery crust. It’s simple and cozy and would make a great addition to your Thanksgiving dessert table. Especially, if say, you love the idea of baking but don’t want the commitment of an actual pie. This pear galette is for you!

What is a galette?

If you’ve never had a galette, it’s time to change your life. They’re the best! Galettes are a French pastry made with pie dough and fruit. (There’s also a savory version of a galette which is basically a buckwheat crepe, but that’s not what we’re talking about here).

Anyways, galettes are basically really thin pies, which I’m really into because I love the crust-to-filling ratio. Galettes are also more rustic (a.k.a. forgiving) and easy to make than regular pies. They also don’t require a ton of cooling time, so you can slice into them much faster. Win-win-win.

The best part of galettes is that they only need a handful of ingredients. You’ll need:

How to make this easy, rustic galette

This galette comes together really quickly and easily. The perfect dessert situation!

What pears should I use?

I usually use some type of red pears when I make this galette because I think they look so pretty when they bake up. But sometimes, I like to switch things up! Here are my top picks for baking pears:

No matter which pear variety you choose, make sure that the pears are ripe but still firm. Overripe pears will fall apart when you bake them and have a mushy texture. On the other hand, underripe pears will be tasteless and crunchy. To speed up the ripening process, you can put the pears in a brown bag for a 1-2 days before baking.

You can’t go wrong with a scoop of vanilla ice cream. But, I like to switch things up with butter pecan or salted caramel ice cream – so good! You can also just top slices of the ginger pear galette with whipped cream. For a little crunch, try adding a sprinkle of toasted pecans! Also, this galette goes perfectly with a cup of hot coffee. The perfect autumn combo!

If you have leftovers, place the galette slices in an airtight container and store for 2-3 days. I do not recommend refrigerating the galette, or it will get soggy.

To freeze the galette, wrap it tightly with parchment paper. Place the galette in a freezer bag or airtight container and freeze for up to 2 months. Unwrap and let it defrost at room-temperature for 1-2 hours. If you want to re-crisp the crust, bake it at 350°F for 10-15 minutes. Keep a close eye so it doesn’t burn! 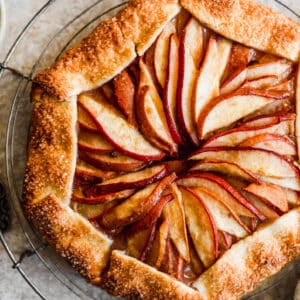 *Song of the Day: Flowers in Your Hair by The Lumineers