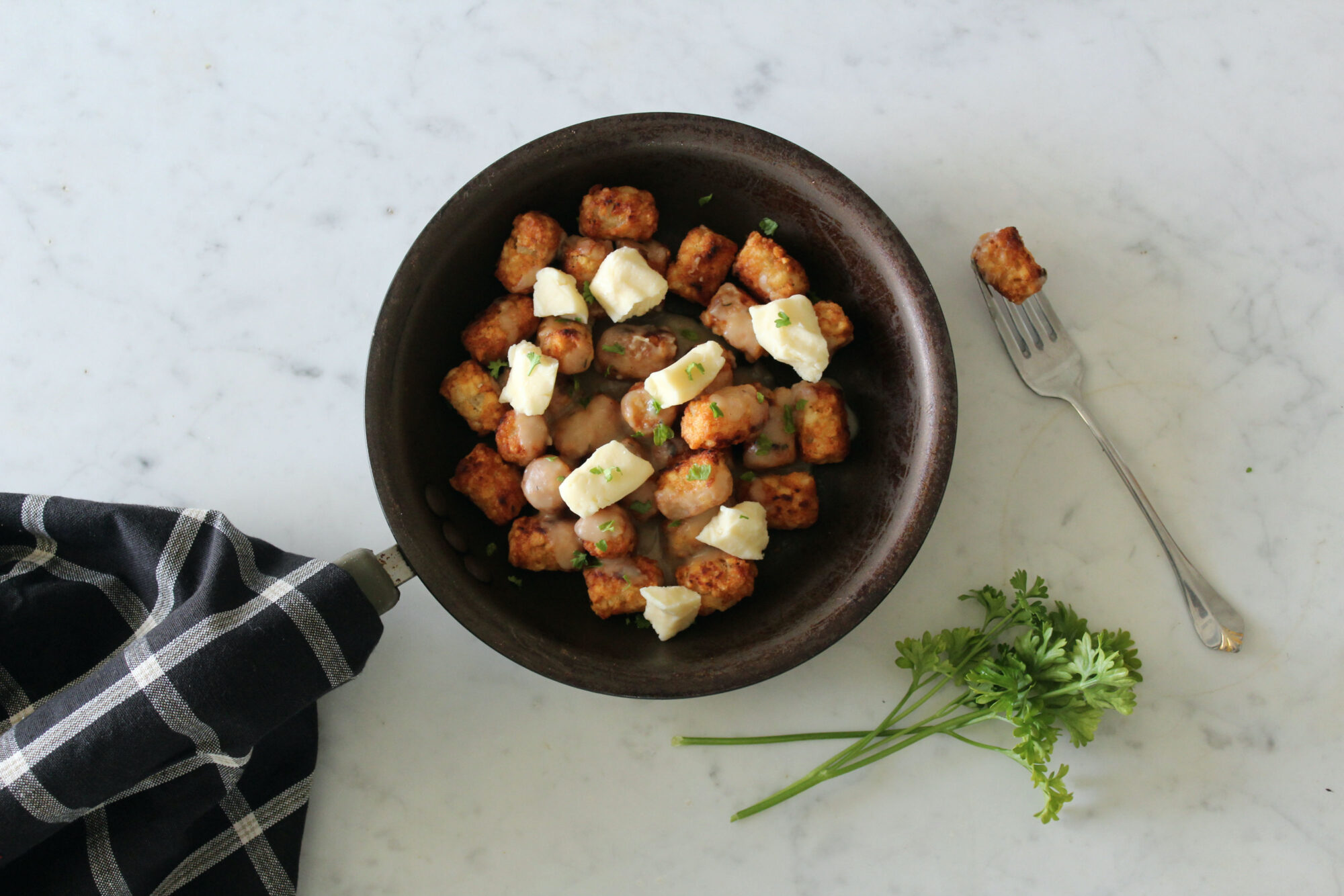 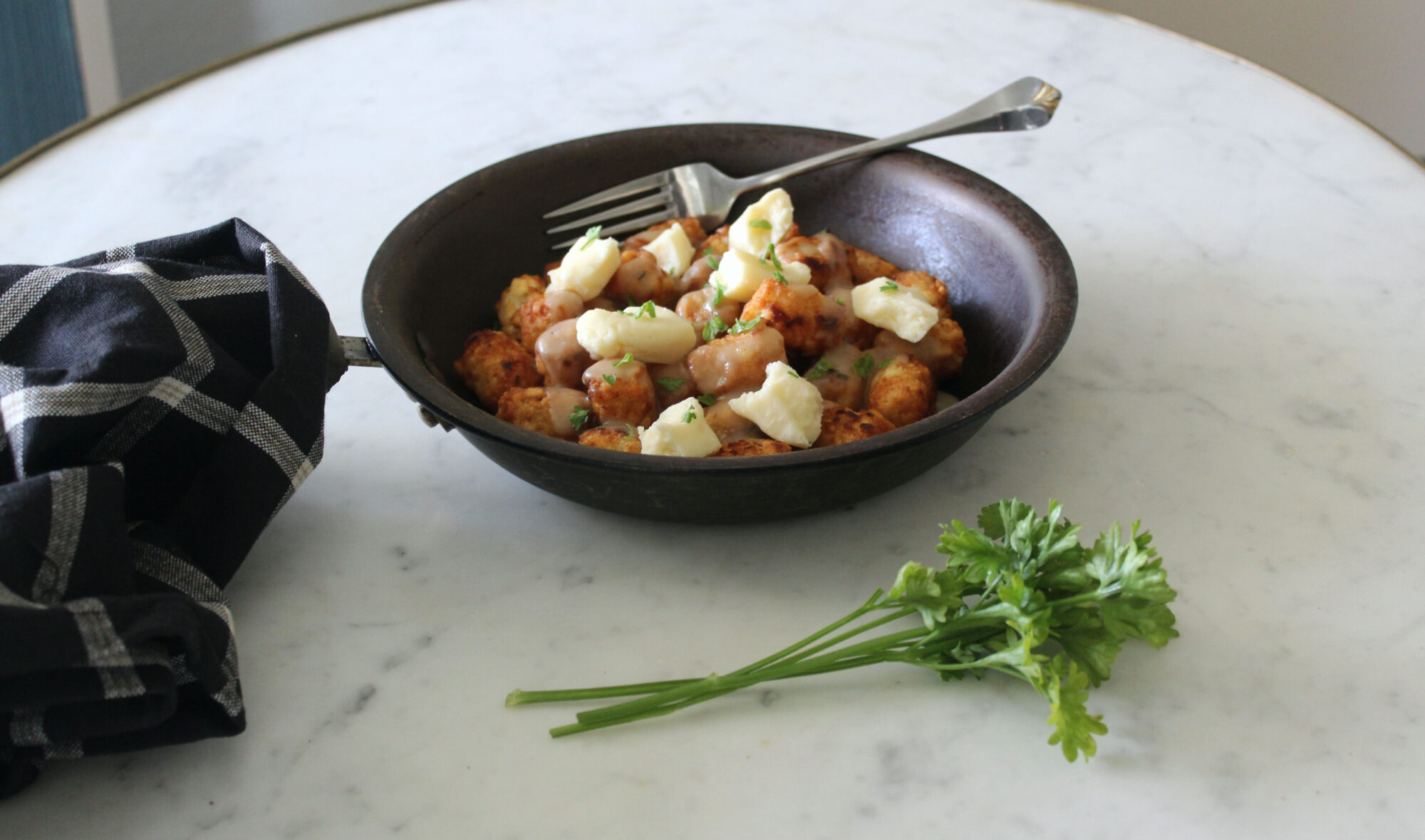 Happy Thanksgiving!!!!!!  Today, my Canadian friend, Stephen, comes into town to experience  American Thanksgiving, so to celebrate, here’s a classic Canadian recipe!  If you read about my Canada trip, you know that I spent one late, post-beer night at Smoke’s Poutinerie, which I’ve been told is the classic around those parts.  I ate “traditional” poutine, some drunk college kids told me I look like Bjork, and then we piled into an uber and I woke up with a gravy hangover the next day.

Tomorrow, I also plan on waking up with a gravy hangover although I’m hoping this gravy is topped over a mountain of mashed potatoes and cornbread stuffing.  Yesterday I went to the liquor store after work, which was absolute utter madness, but I got some fancy gin, and I’m ready to party.  I will be spending my weekend surrounded by 40+ people who share my DNA, and I have dubbed myself the official gin + tonic maker for the weekend. 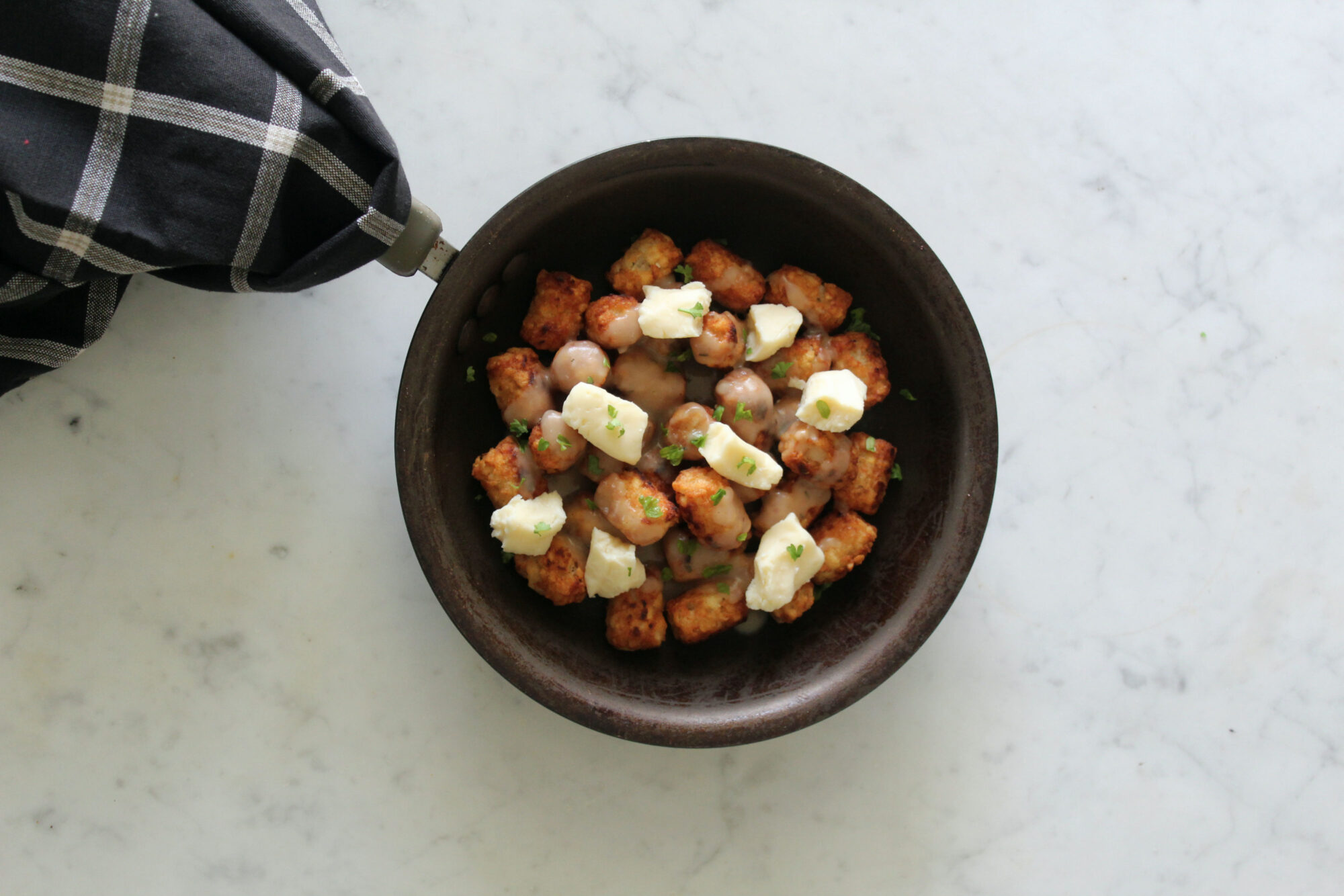 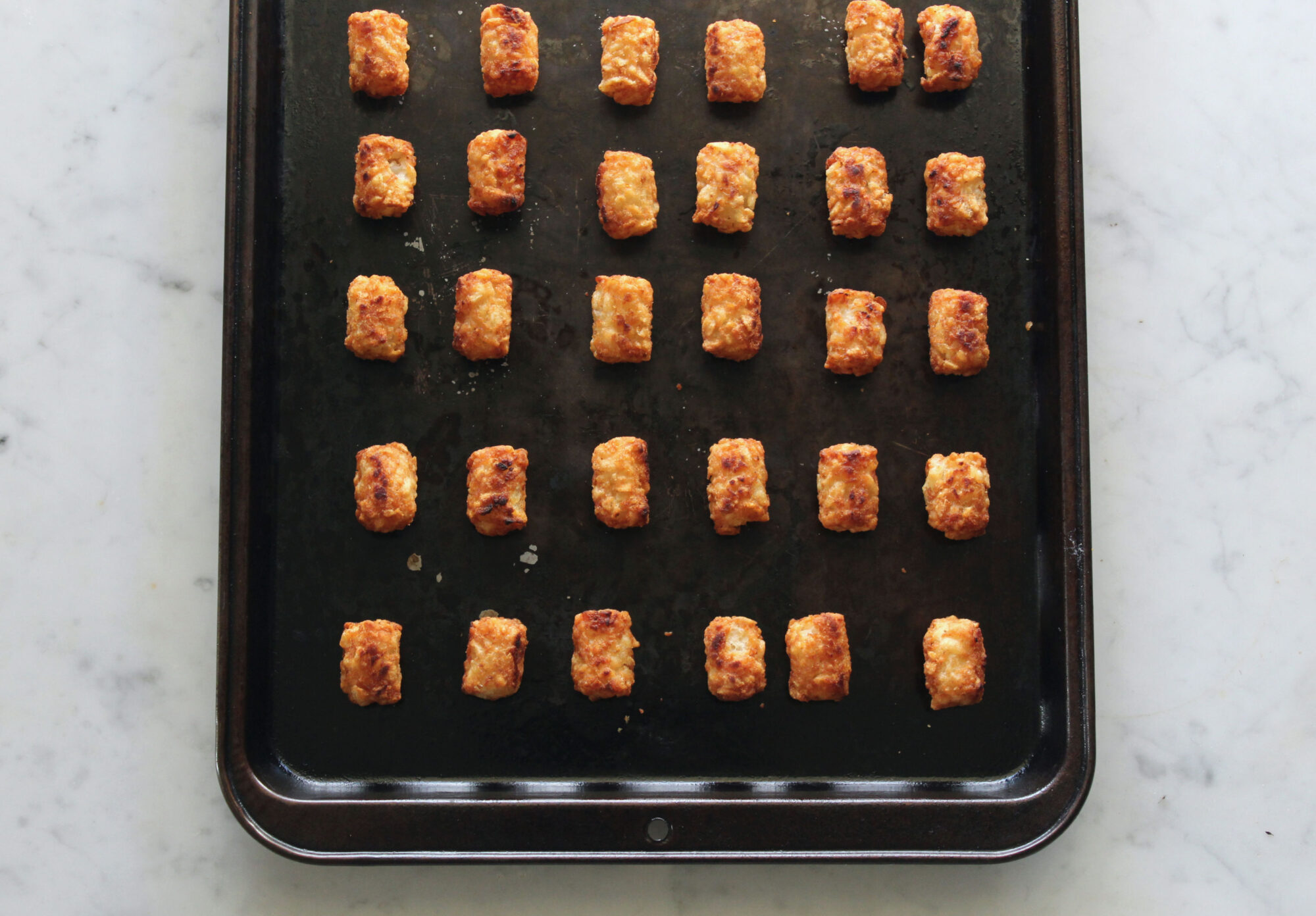 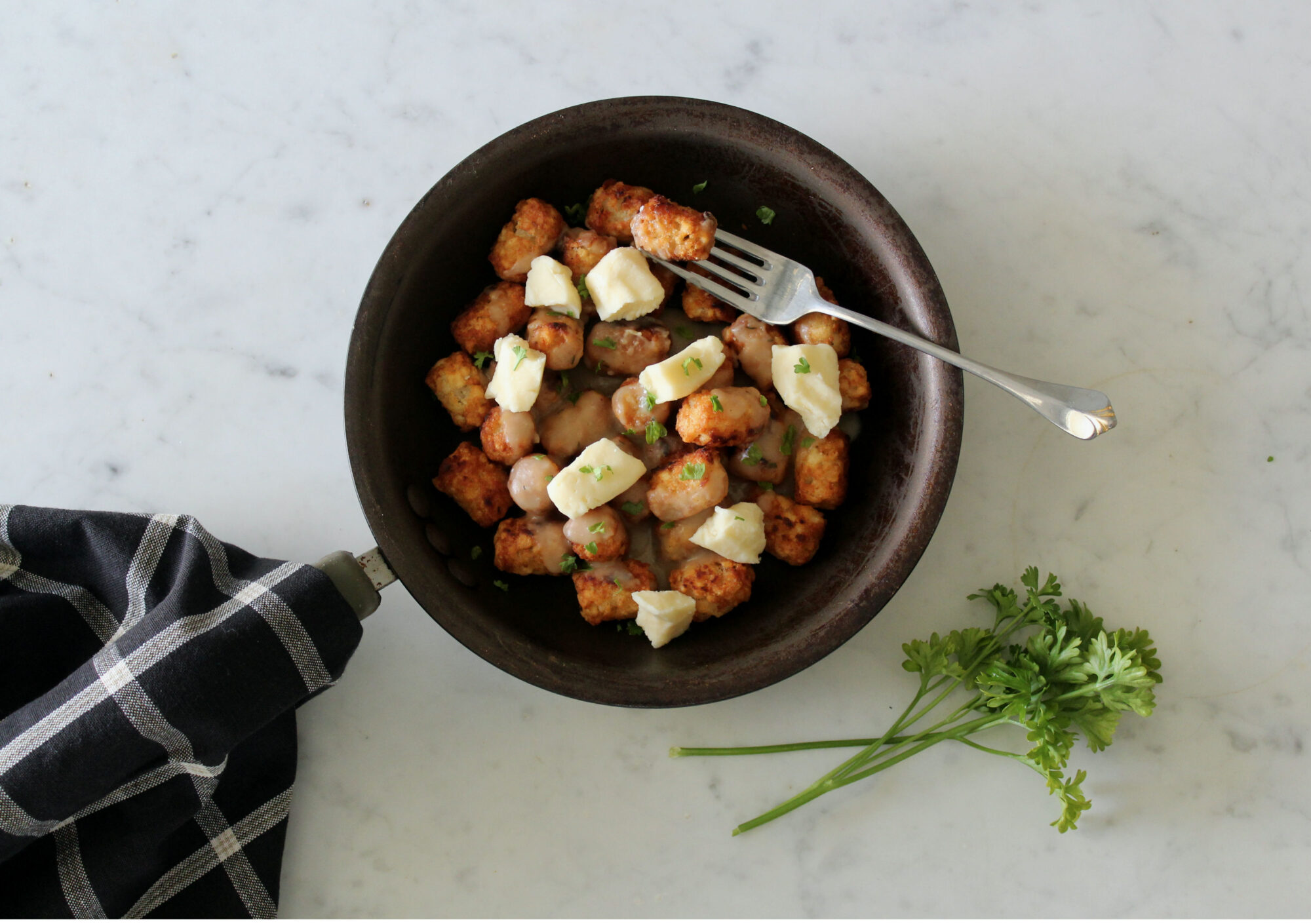 When I asked in my Toronto post if it would be sacrilege to use tater tots instead of french fries in poutine, Stephen came back with a resounding “YES”.  However, because I have no manners, and because deep frying foods in my own house is something I avoid like spiders and vacuuming, tater tots were the obvious choice.  Plus, tater tots ♥

While we’re on the matter, would if be totally inappropriate for me to top mashed potatoes with gravy and cheese curds?  Do you think Stephen would just totally leave the country and never come back???  Would mashed potatoes + gravy + cheese curds be delicious with gin + tonics?  Or is that the gravy-hangover remedy??  If you have answers for these questions, pls let me know ASAP.  There isn’t much time before I pick up the Canadian from the airport and the festivities begin. 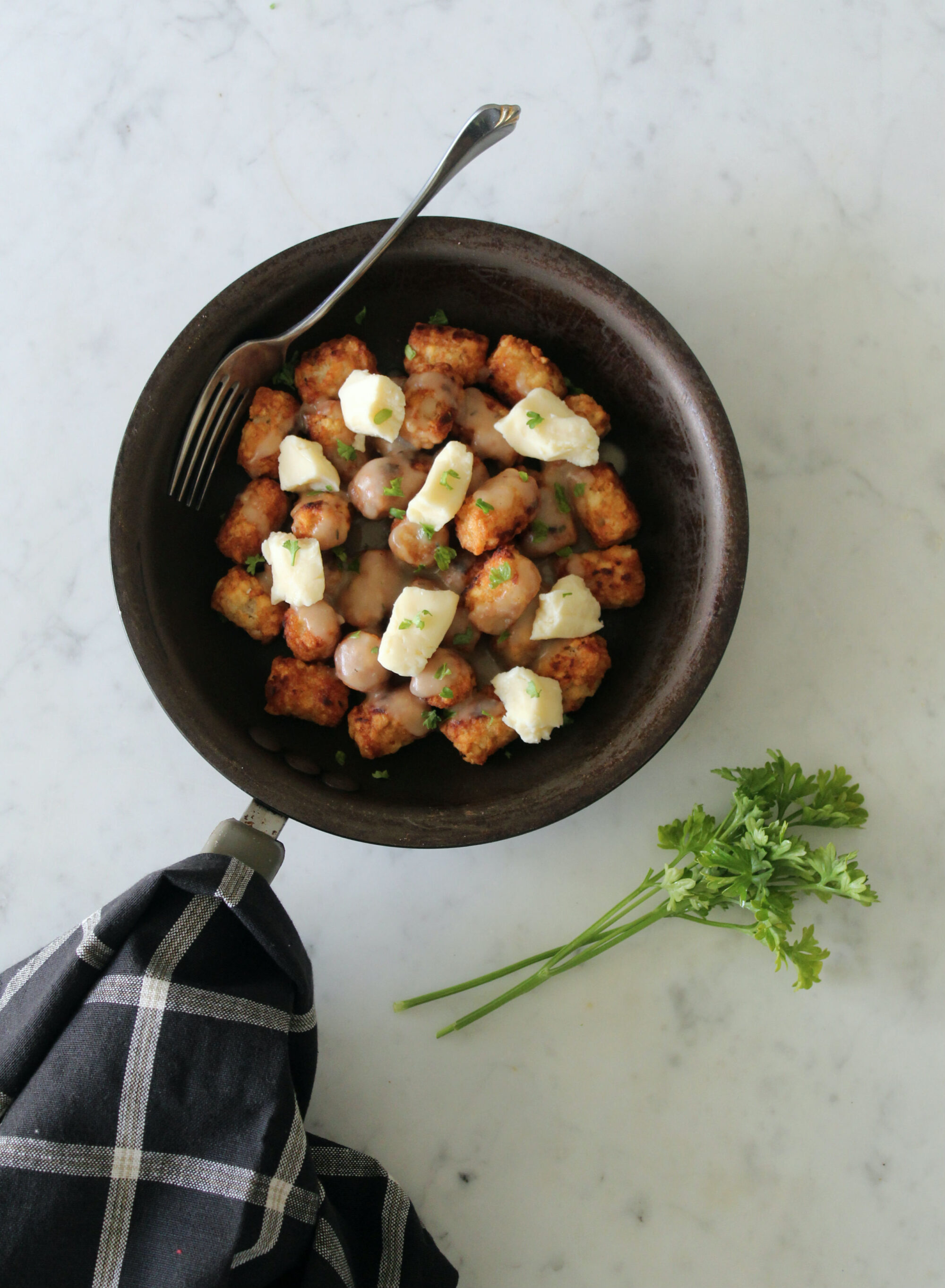 Heat oven to 450* F.  Place the tater tots on a greased baking sheet making sure the tater tots don’t touch.  Bake for 15-20 minutes, flip, and bake for another 10-15 minutes.  You want them to be super crispy but not burned.

Meanwhile, heat the butter over medium heat.  Add the flour and whisk until smooth.  Add the garlic and cook until fragrant, about one minute.  Whisk in beef broth, salt, pepper, onion powder, and thyme.  Stir until thickened.  Keep warm.

Drizzle gravy over tater tots.  Top with cheese curds, and broil it in the oven until the curds are slightly melted.  Top with parsley, if desired.

*Song of the day: Cosmic Sass by Good Morning